An Ounce of Prevention Vs A Pound of Cure

Would you take an ounce of prevention over a pound of cure?

If there was something you could do to prevent a common form of cancer, would you do it?

It is estimated that there will be 178,560 new cases of melanoma, a type of skin cancer, in the US this year and that 9,730 will die because of this disease. Experts have determined that 86% of melanomas can be attributed to exposure to the sun’s UV rays and that a person’s risk for melanoma doubles with more than five sunburns during their lifetime.

This means that certain forms of skin cancer, such as Basal Cell Carcinoma, are generally preventable, if you take the proper precautions such as wearing sunscreen, a hat, sunglasses or simply seeking shade.

Basal Cell Carcinoma (BCC) – Basal Cell Carcinoma is the most common form of skin cancer. These are tumors that develop in the deepest layer of the skin, the outermost layer of skin. These tumors rarely spread but can be destructive and disfiguring where they occur. BCC’s often look like open sores, red patches, pink growths or shiny bumps or scars.

Melanoma – This cancer comes from damaged or defective melanocytes, which are skin cells that product the protective skin darkening pigment melanin. UV exposure damages melanocytes which causes sunburns and sun tans and can lead to melanoma.

Squamous Cell Carcinoma (SCC) – The second most common kind of skin cancer, these tumors can metastasize when left untreated and get big. There are a number of treatments for small SCCs, including freezing, scraping or excisional surgery. Another type of SCC removal is Mohs Surgery. 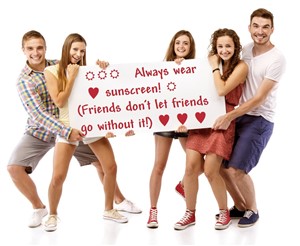 Exposure to ultraviolet (UV) rays from the sun causes DNA damage that can lead to skin cancer, so if adding sunblock to your morning regimen feels unnecessary, then consider this; the Skin Cancer Foundation claims more than 90% of visible skin changes associated with aging are caused by the sun’s UV rays. AKA – WRINKLES!

The safest, and best look for you this summer should be a baseball cap, sunglasses, and most importantly, a broad-based spectrum sunscreen with SPF 20 – 50.

At Caddell’s Laser Clinic, we offer the following Sunscreens for our clients:

Since skin cancer is mainly a lifestyle disease it can be prevented with a few basic behavior changes. Adopting a sun protection strategy can radically reduce your risk. You are never too young, or too old to use skin protection because sun damage is cumulative. Without skin protection, you’re leaving your skin unprotected and exposed to harmful UV rays from the sun. If you’re young – you’re not invincible and if you’re older and a senior citizen – it’s not too late.

If you’re a skin cancer warrior I encourage you to share your story with others and encourage them to wear sunscreen and be protective of their skin too.